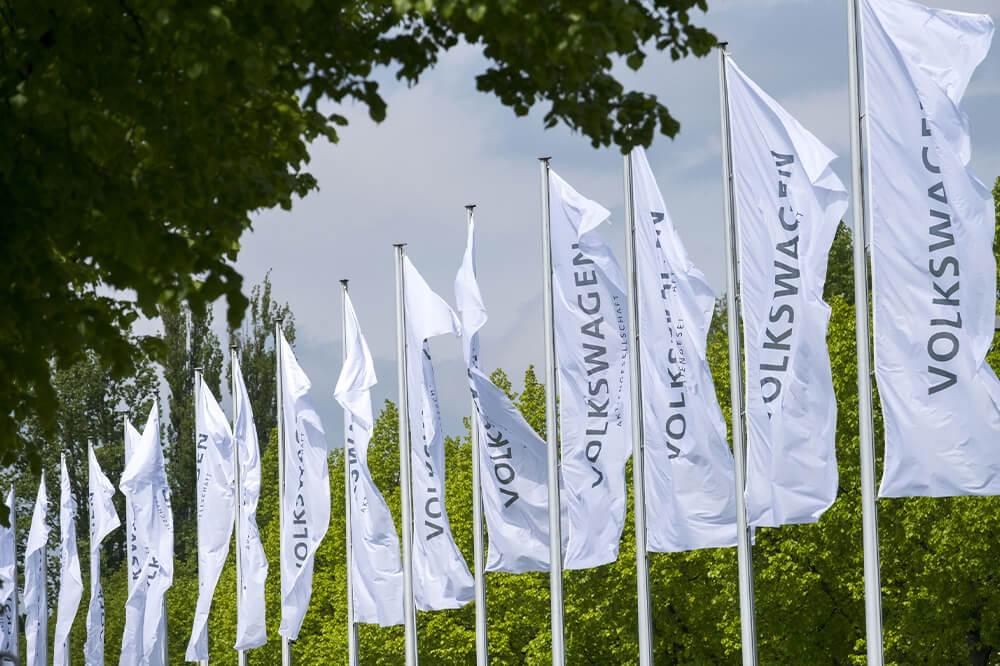 The global semiconductor bottlenecks particularly impacted on the business performance of the Volkswagen Group in the third quarter. Operating profit before special items came to EUR 2.8 (3.2) billion in the period from July to September, a drop compared with the first two quarters of this year and the pandemic-related weak prior-year period. The operating return on sales before special items declined to 4.9 (5.4) percent in the third quarter. The volume brands were affected most in this period, recording operating losses in spite of having full order books. Owing to the semiconductor shortage, the high level of customer demand in China could also not be met. In the first nine months of the year, the Group’s brands lifted deliveries to customers by 6.9 percent to 7.0 (6.5) million vehicles. Sales revenue saw a more significant increase, rising by 20.0 percent in the same period to EUR 187 (155) billion. Due to the strong first half, operating profit before special items, which stood at EUR 14.2 (2.4) billion after nine months, remained at a solid level and exceeded the pandemic-related weak prior-year figure. The operating return on sales was 7.6 (1.5) percent. The Automotive Division achieved an adjusted net cash flow of EUR 12.4 (4.5) billion by the end of September, thus contributing substantially to the financing of the Group’s transformation. Despite the impact on working capital caused by the semiconductor shortage, adjusted net cash flow for the third quarter was slightly positive at EUR 33 million. Net liquidity in the Automotive Division fell by EUR 9.4 billion compared with the first six months to a still robust level of EUR 25.6 billion. Here, the Navistar transaction completed by July had a perceptible effect of around EUR 6 billion. In addition, a dividend of EUR 2.4 billion was distributed to Volkswagen shareholders in the third quarter. The Volkswagen Group confirmed its outlook for the operating return on sales for full year 2021 of 6.0 to 7.5 percent.

Herbert Diess, CEO of the Volkswagen Group: “The results of the third quarter show once again that we must now systematically drive forward the improvement in productivity in the volume sector. We are determined to maintain our strong position against established and new competitors and to vigorously implement the transformation toward climate-neutral, digital mobility with our NEW AUTO strategy.”

The Volkswagen Group presented its NEW AUTO strategy in July based on a combination of the strong volume, premium and sport brand groups and on global technology platforms. The strategy’s goal is to achieve Group-wide economies of scale and leverage synergies by 2030. The plans include rolling out a Group-wide mechatronics platform, a standardized operating system and a unified battery cell and also establishing a mobility platform. The latter shall be expedited through the planned transaction with Europcar announced on July 28. The transformation is to be financed with a wide-ranging set of measures to reduce fixed and material costs, to improve productivity in production and working capital. Among other things, the main site in Wolfsburg will be prepared for the changed competitive situation by establishing the Volkswagen brand’s forward-looking Trinity project there and a new technical development accompanied by a modernization of the plant.

Arno Antlitz, CFO of the Volkswagen Group: “Following a record result in the first half of the year, the semiconductor bottlenecks in the third quarter made it abundantly clear to us that we are not yet resilient enough to fluctuations in capacity utilization. This clearly shows that we must continue to work resolutely on improving our cost structures and productivity in all areas. In order to be able to implement our NEW AUTO strategy as planned and finance our transformation towards e-mobility and digitalization on our own, we need to make decisive improvements.”

Operating business in Q3 noticeably down due to semiconductor bottlenecks

Demand remains high for the Group brands’ attractive models. In the Group’s home market of Western Europe alone, orders for passenger cars topped one million vehicles by the end of September, 17 percent of them all-electric vehicles (BEVs). However, in the third quarter the semiconductor shortage led to a sharp drop in deliveries of 24.4 percent compared with the prior-year period. The four volume brands were particularly affected, posting operating losses between July and September as a result. By contrast, the Financial Services Division developed very robustly in the third quarter with an operating profit of EUR 1.5 billion. Among other things, it benefited from strong used car business and a positive trend in risk costs.

Despite the semiconductor bottlenecks, the Group successfully continued its global electric offensive and delivered 122,100 all-electric vehicles (BEVs) in the third quarter, more than twice the number in the prior-year period (+109 percent). The global share of vehicles based on the Modular Electric Drive Toolkit (MEB) relative to all BEVs increased further to 69 percent in the third quarter. After nine months, a total of 293,100 customers thus took delivery of their new BEV from one of the Group brands (+138 percent). Demand for models with a plug-in hybrid drive (PHEV) also remained high: by the end of September, a total of 246,000 vehicles had been delivered, more than double the figure for the prior-year period (+133 percent).

Particularly in China, the BEV market ramp-up accelerated significantly between July and September, as 28,900 BEVs were delivered, compared with 18,300 in the entire first half of the year. The new ID. city stores established there are seeing higher footfall and a higher conversion rate than traditional dealerships. There are currently more than 60 locations for ID. stores, and the figure is expected to rise to 170 by the end of the year. The Group still aims to deliver 80,000 to 100,000 vehicles from the ID. model family in China this year, depending on the availability of semiconductors.

Until the end of September, the Volkswagen Group reported a year-on-year increase of 6.9 percent in its worldwide deliveries to 7.0 (6.5) million vehicles. Global market share of passenger cars declined by 0.9 percentage points in the same comparative period to 12.1 percent. Whereas the Group was able to grow its market share in its home market of Europe and in North America, China, its largest single market, was hit particularly hard by the semiconductor bottlenecks, which reduced the Group’s share of this market in spite of high demand.

The increase in sales, especially of higher-margin vehicles, lifted the Group’s sales revenue significantly by 20.0 percent to EUR 186.6 (155.5) billion. The operating profit before special items rose by EUR 11.8 billion to EUR 14.2 billion, thus exceeding the pandemic-related weaker prior-year figure. The operating return on sales before special items therefore came in at a solid 7.6 percent. The higher earnings were mainly due to improvements in vehicle sales, the product mix and prices, as well as positive effects from the valuation of raw material hedges. One-off restructuring expenses of EUR 0.7 billion at MAN Truck & Bus had a negative impact.

The reported net cash flow in the Automotive Division was a high EUR 7.2 (1.4) billion after nine months. The acquisition of Navistar had an effect of EUR -2.6 billion in the third quarter, resulting in an overall figure of EUR -3.0 billion for this key indicator in this period. Adjusted for mergers and acquisitions and cash outflows attributable to diesel, net cash flow after the first three quarters amounted to a strong EUR 12.4 (4.5) billion. Despite the impact on working capital caused by the semiconductor shortage, adjusted net cash flow for the third quarter was slightly positive at EUR 33 million. Net liquidity in the Automotive Division remains very robust at EUR 25.6 billion but decreased as expected in the third quarter, especially due to the acquisition of Navistar, which had an overall effect of around EUR 6 billion, and to the dividend payment to Volkswagen’s shareholders. It was EUR 35.0 billion at the end of the first half.

Research and development costs increased to EUR 11.4 (10.2) billion due to necessary future-oriented investments in new models, technologies and software. The R&D ratio nevertheless fell to 7.5 percent in the current year, following a figure of 8.1 percent in the prior-year period that was due to pandemic-related low sales revenue. Improved investment discipline and greater use of Group synergies led to significant progress with capital expenditures. These decreased by 8.3 percent over the prior-year period to EUR 5.9 (6.4) billion. The ratio of capex to sales revenue consequently decreased significantly to 3.9 (5.1) percent.

Based on business performance in the first nine months of 2021 and the acquisition of Navistar, the Volkswagen Group is adjusting its forecast for the key performance indicators.

The risk of bottlenecks and disruption in the supply of semiconductor components has intensified throughout the industry. Their adverse impact has been seen especially since the start of the second half of the year. Consequently, the Group is lowering its forecast for deliveries to customers and anticipates them to be in line with the previous year in 2021 amid market conditions that continue to be challenging. This prediction assumes successful containment of the Covid-19 pandemic and takes into account the deterioration in the supply situation as a result of the semiconductor shortage. Challenges will arise particularly from the economic situation, the increasing intensity of competition, volatile commodity and foreign exchange markets, securing supply chains and more stringent emissions-related requirements. Sales revenue of the Volkswagen Group in 2021 is expected to be considerably higher than the prior-year figure. In terms of the operating result before and including special items, however, the Group continues to anticipate a return on sales of between 6.0 and 7.5 percent, as contained in the raised guidance issued at the half-year mark.

The Automotive Division expects that lower cash outflows from diesel and a marked rise in effects from mergers and acquisitions, including the acquisition of Navistar, will lead to a noticeable increase in net cash flow compared with the prior year. Net liquidity is anticipated to be at a robust level, distinctly down on the previous year. 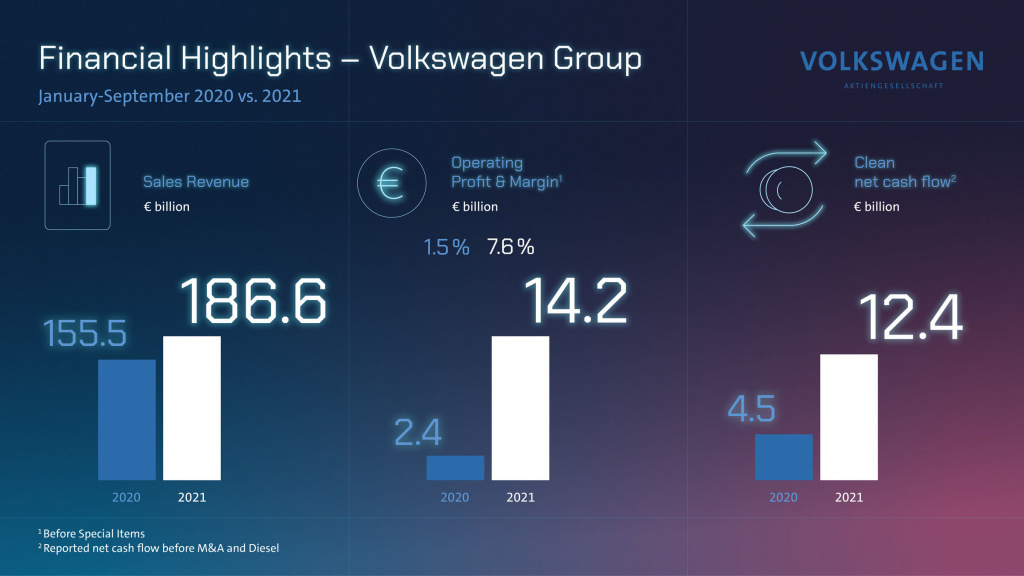 1Volume data including the unconsolidated Chinese joint ventures. These companies are accounted for using the equity method. Prior-year deliveries have been updated to reflect subsequent statistical trends.
2Including allocation of consolidation adjustments between the Automotive and Financial Services divisions.
3Excluding acquisition and disposal of equity investments: Q3 €3,670 (3,754) million, Q1–Q3 €11,029 (10,657) million.